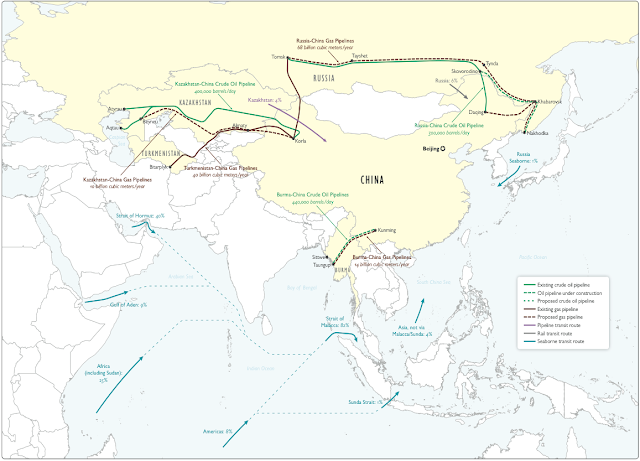 For China, the other half of the infrastructure puzzle is developing overland energy corridors, namely oil and gas pipelines from Iran and the Caspian Region.  This project started in the 1997, when Kazakhstan and China agreed to a “project of the century,” with Beijing promising to invest nearly $11 billion in Kazakhstan’s oil infrastructure and pipelines.  Development, however, was slow, and it took until 2003 for China to begin making waves in the Kazakh oil sector, when the Chinese National Petroleum Company bought 100% of the shares in the Northern Buzachi fields (Mangistau region) from Chevron-Saudi consortium.  And from that point on, the Chinese government has worked steadily to acquire more production companies in the field, as well as joint deal with Kazakh state owned companies like KazMunaiGaz.  According to the estimates of Kazakh government researcher Konstantin Syroezhkin, by 2012:
China’s share in oil production in Kazakhstan amounts to around 25-27% and in gas production to13-15%. Of course, these figures are far from those with which the Kazakhstani opposition and some deputies “frighten” the Kazakhstanis (40%), but they are quite considerable, particularly if we keep in mind the areas Chinese companies are operating in the country and the fact that the oil and gas sector is the basis of Kazakhstan’s economy and the main contributor of revenue to the budget.[1]

Also in 2003, plans were signed to develop a Westen Kazakhstan-China oil pipeline. Within a year construction on the first phase had begun, and by 2005 a ­­____mm oil pipeline from Atasu to the Kazakh-Chinese border at Alashankou was complete, at a cost of over $800 million. In July 2006, according to a press release from the state-owned PetroChina company, the first oil shipments were received in Dushanji, an oil refinery 240 km inland from Alashankou, of historic significance as these were the first overland crude oil shipments ever sent to China.[2]  In 2007, construction on the second phase, running from Keminyak to Kumkol began, and again within 2 years the project was complete.  Throughput of the overall pipeline network, which started at 10 million tons of crude oil per year, was planned to increase to 20 million tons in 2012 and 50 million tons in 2020.[3]
A natural gas pipeline has been constructed from Central Asia to China as well, connecting gas fields in Kazakhstan and Turkmenistan to Khorgos at the southern end of the Kazakh-Chinese border.  The first stage of this pipeline, started in 2007 and completed in 2009, runs from the Uzbek-Kazakh border through Shykment to Korgos.  With a throughput capacity of 40 billion cubic meters of gas, the pipeline covered a distance of 1,333 km, and came at a cost of $7.5 billion.[4]  A second phase within Kazakhstan has also been planned, running from Beynu, near the Caspian Sea to Shykment.

Uzbekistan and Turkmenistan have also worked closely with the Chinese to develop petroleum resources and pipelines.  For Uzbekistan, this began in 2005, when President karimov visited Beijing and signed agreements for the Chinese government to invest in Uzbek energy resources.  By 2010, the Uzbek section of the Central Asia-China gas pipeline was complete, and agreements had been signed to export 10 bcm per year of Uzbek gas to China, with plans to increase this by 25 bcm.  This, however, is small potatoes compared to Turkmenistan, which has agreements with Beijing to export upwards of 40 bcm of gas to China every year, and at dirt cheap prices, making China by far the largest investor in Turkmenistan’s gas sector.  A meeting in ______ symbolized the new petroleum reality In Central Asia, with Chinese President Hu Jintao, Uzbek President Islam Karimov and Kazakh President Nuralstan Nazarbaev all convening with their Turkmenistan colleague to inaugurate the new gas pipeline.  This reality was set in stone in November 2011, when Turkmenistan President Gurbanguly Berdymukhamedov, while on a visit to Beijing, signed an agreement to increase gas exports to China by 25 billion cubic meters per year, raising the total gas trade between the two states to 65 bcm per year, or roughly half of China’s gas consumption in 2010.[5]